The Diamond Pack are no longer considered a Washington wolf pack as their pack territory has moved into Idaho.

Although the Diamond Pack was confirmed as a gray wolf pack in 2009 in Washington, wolves from the pack were observed back in 2007. The breeding male (WA-398M) was captured and fitted with a GPS collar in July 2009. Two small pups were also captured, ear tagged, and released that year. In 2009, the breeding pair produced six pups and at least four of those survived to 2010.

The battery expired on WA-398M’s collar in July 2010, but a yearling female (WA-376F) was captured and GPS radio-collared that June. Three other yearling wolves (WA-378M, WA-380F, WA-382F) were captured and ear-tagged, but were not collared and one small pup was caught and released. The pack produced six pups in 2010 and numbered 12 wolves at the end of the year.

While there are currently no functioning GPS radio-collars in the Diamond Pack, there is one regular tracking collar remaining in the pack on adult female WA-013F, who was  captured and collared in June 2011.

WA-398M: The breeding male of the Diamond Pack. Radio collared in July 2009, but no longer sends a signal.

WA-382F: Female wolf. In June of 2011 she was fitted with a GPS radio-collar. She was legally killed by an Idaho trapper 300 yards from the Washington border in December. 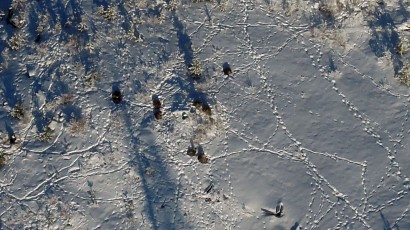 Aerial photo of the Diamond Pack.