The Umatilla River Pack is no longer considered active.

On June 20, 2012 OR-14, a gray wolf using the northern Mt Emily wildlife management unit, was GPS collared by Oregon Department of Fish & Wildlife in the Weston Mountain area north of the Umatilla River. The gray-colored male wolf weighed 90 pounds and was estimated to be at least 6 years old.

Pictures taken Aug. 2, 2012 from an ODFW remote camera showed that there are at least two wolf pups with the Umatilla River pair. With four individuals in the group, it was then considered a pack.

The breeding female of the pack was a subadult female, named OR-28, who was collared in 2014.  Two depredation incidents were also attributed to this pack in 2014.

OR-14 had been the breeding male of the Umatilla River Pack in the northern part of the Mt Emily Unit since 2011, but early in 2015 he left the pack area and became resident in Washington.

No Umatilla River Pack data was collected after another radio-collared male dispersed in February 2015.

The pack disappeared from the area during the spring/summer of 2015. OR-13, a disperser from the Wenaha Pack, started using the pack area during the summer, but died in August. Another wolf, OR-30, used the area starting in November and has been become resident there with another wolf.

OR-22: Caught and collared in 2013, and a member of the Umatilla River Pack that had dispersed into new territory, OR-22 was “accidentally” shot and killed on October 6, 2015 near Prairie City, by a hunter who contacted the ODFW to report the incident. Police are currently investigating and charges could include one year in jail and a fine up to $6,250. He attracted some attention after arriving in Malheur County when several farmers and irrigation ditch workers spotted him laying in a wheat field west of Adrian on April 21, and was even spotted swimming in a canal in front of some ditch workers.

OR-28: Breeding female of the Umatilla River Pack. Radio collared in 2014. 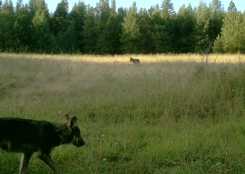